The tower was built in 1716 under Pope Clement XI as a watch tower for enemy ships, and against pirate attacks. The building has three floors, on the ground floor there is the hall with a vaulted brick ceiling. This was the headquarters of the papal guards. The nests of the traveller pigeons are still visible high up on the inside wall. The coat of arms of Pope Albani,with plaque and the inscription “ Clemens XI iussit 1716”, is still also visible on the façade of the church. Currently it is the headquarters of the Adolfo and Lauro Bosis Association. It was infact the preferred refuge for the local poet from Ancona Antonio de Bosis (1862-1924). Here he found the inspiration for his poetry. The collection of poems “ Il convito” bears witness to this historical period and was written in collaboration with G D’Annunzio, G Pascoli and other writers. The de Bosis family bought the tower at the beginning of the 1900s and it still belongs to the same family. The neighbouring house was built more recently, in 1915. 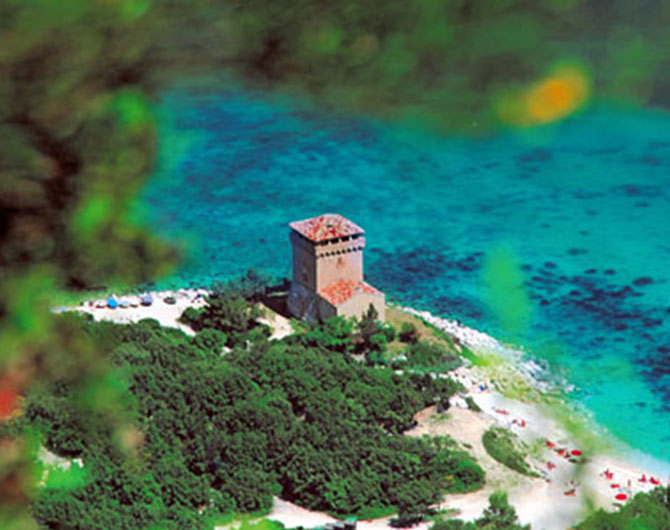 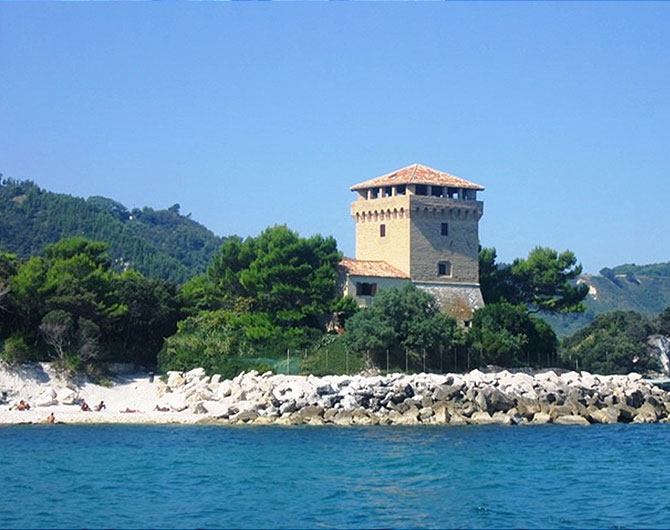 The Church of Saint Maria

The only remaining trace of the monastic civilization that inhabited the Conero during the Middle Ages is the enchanting church of Saint Maria, a masterpiece of Roman architecture (XI Century). The vibrant spirituality present in the white stone and elegant architecture of this beautiful church dominate this special place. The imagination wanders back to 800 years ago when the church and the neighbouring monastry were inhabited by Benedictine monks, once the only humans in this area of Portonovo. The church and its surroundings were the perfect refuge for the observance of the Holy rule, work, prayer and anonymity.

History
The Abbey was built by some Camaldolese monks in 1034 on land donated by a man named Stefano di Germano di Poggio.In 1225 there was also a monastry but it was later destroyed. Saint Maria of Portonovo was a very powerful abbey with vast estates. Legend says that San Pier Damiani, disciple of the great St Romualdo, founder of the Camaldoli monastery stayed there. We discover this in a passage from Dante’s Paradise: “ I Pier Damiano was in that place, in the house of Our Lady on the Adriatic Coast”. The abbey was most definatly home to Saint Gaudenzio, a Dalmatian monk , in 1050. In 1320 the days of the famous monastery suddenly ended. It was abandoned due to the heavy landslides on Monte Conero and then repeatedly plundered by Turkish pirates. It was only at the end of the XIX century, thanks to the restoration work carried out by Sacconi in 1894 and later restoration carried out between 1988-1996 that the church reacquired its role as a thousand-year witness to man’s work during his walk of faith.

Description
In the words of Sacconi himself, “the church is a miracle and it is the most complete Roman monument to be found on the Adriatic coast from Ancona to Brindisi”. The extraordinary beauty of this church lies in its Byzantine architectural features and the expert workmanship of the lombard architects. It is built using white Conero rock, the Roman-Lombard basilica shape has 5 naves, which is very unusual. The two external naves, to the right and to the left of the main alter, are shortened and look like a transept. The three apses face towards the sea and the rising sun shines through the windows onto the dawn office and the monks morning prayers. One important feature of the byzantine style is the dome that stands on a rectangular base and ends in an ellipsoid shape. 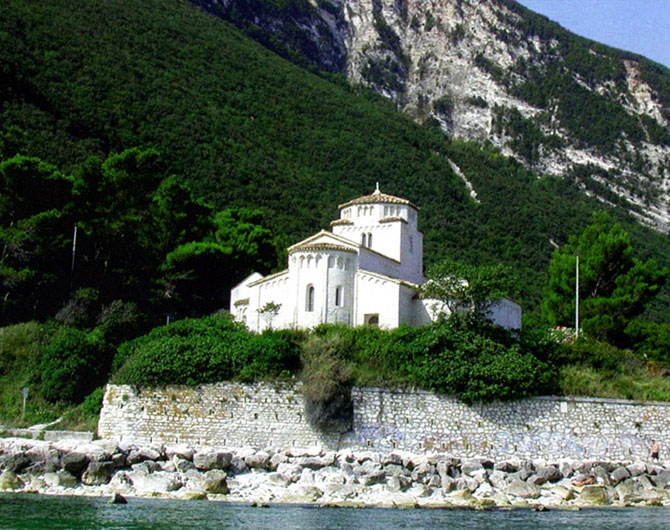 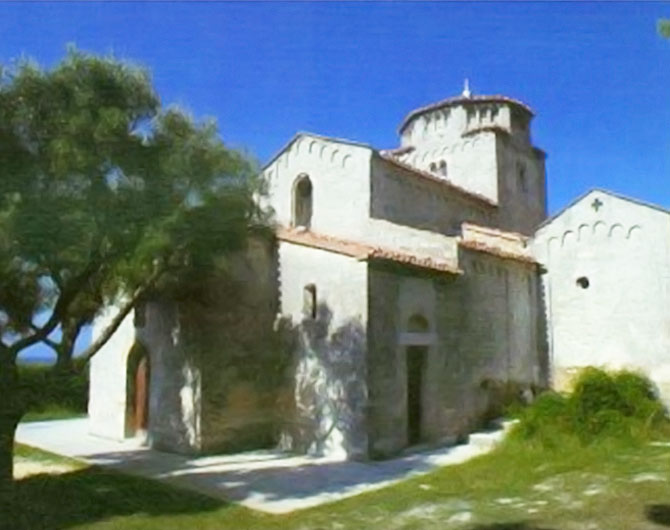 The Italian viceroy, Eugenio di Beauharnais, step- on to Napoleon, built the fortress according to the Emperor’s request between 1811 and 1813. Napoleon himself defined Ancona as, “an important base to guarantee Frances’s dominance over the Adratic and the expanding routes towards the East.” Eugenio Beauharnais, together with other rulers during that period, received orders from the Emperor to apply the continental coalition regulations against England, that were drawn up by the Emperor after his victory over Prussia in 1806. The Fortress at Portonovo became part of a ground and sea defense system to control the Adriatic, with the direct role of preventing the landing of goods arriving from England or from foreign ships that had visited English ports. But Portonovo was not only chosen for this reason. It was also a tactical base firstly, to defend Ancona from the South preventing the landing of British troops or english allies. Secondly, to prevent the English ships, that had travelled across the Adriatic looking for French or Italian vessels, from taking on board fresh water provided by Portonovo spring situated just 200m from the bay. We now come to the architectural and defensive features of the Fort. It was partly built using stones belonging to the Benedictine Monastery, next to the S.Maria di Portonovo church. It is a classic example of military, napoleonic architecture, taken however from drawings by our own great Francesco di Giorgio Martini and maybe even the military works of Leonardo da Vinci. It has round bastions which once held the batteries of canons and casemates that served as barracks and as storage space for amunition and food. At the centre of the semi-circle, created by the casemates, there used to be a courtyard with a central command post. This was in part built with materials recovered from a Roman temple. According to historians the garrison held 600 soldiers from the Kingdom of Italy. There are no records of any important battles taking place in the years following the construction of the fortress up until the fall of the Naoleonic empire. In later years, following its reintegration into the Papal State and the battle of Castelfidardo in 1860, the fort succumbed to the passing years and acts of vandalism and slowly fell into ruin. The fortress was completely restored in the 1960’s and, since 1969, has been one of the most popular hotels on the Adriatic Coast Fortunatly this restoration did not alter the original architectural features; the armery, the courtyard, the Officers room and the room with the fireplace. 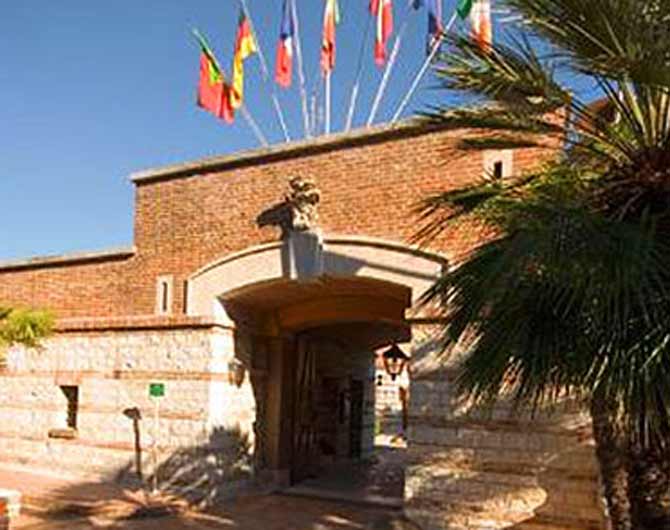 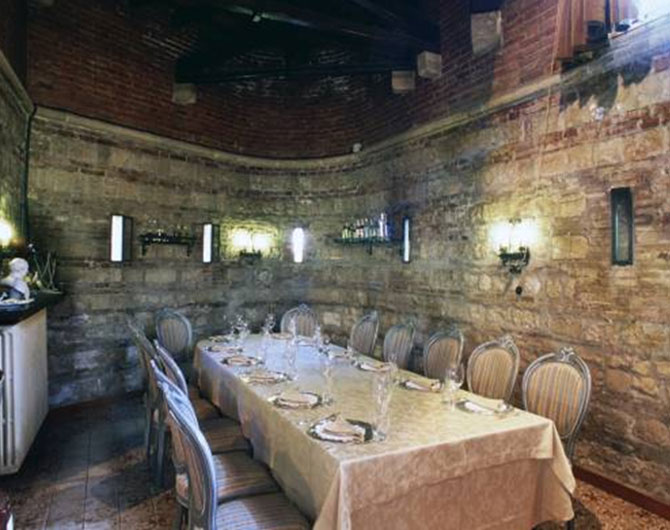 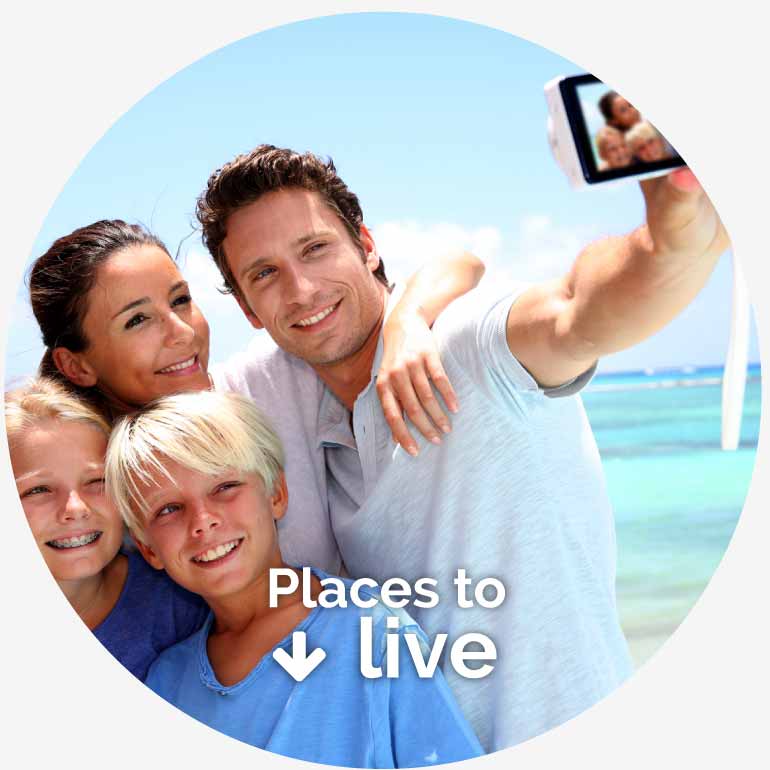